Young couple transitions to dream farm thanks to retiring neighbours

Todd and Jennifer Payne bought their first 50 sheep from John and Eadie Steele’s breeding stock farm, Shepherd’s Choice, in 2015. At the time, they never dreamed that one day they would own the operation, one of the industry’s leading genetics farms.

But that’s just what happened. Within five years, the Steeles had shared their objectives with the Paynes and seized an opportunity to construct a non-traditional succession agreement — one that met the “next stage” goals of the Steeles and the farming aspirations of the Payne family.

Shepherd’s Choice started in the late 1990s on land cleared by Eadie’s family in Norwood, Ont. Committed to genetic analysis, record keeping, industry benchmarks and cost of production, the Steeles built the herd genetics and are widely respected for their quality breeding stock, including purebred registered Texel sheep.

The Steeles attribute much of their success to their focus on profitability and drive to improve. They’re both graduates of the Canadian Total Excellence in Agricultural Management (CTEAM) program and were named Ontario’s Outstanding Young Farmers in 2002.

They believed a prosperous business would contribute to their farm succession plan. They wanted to make the farm attractive to their two children by establishing a thriving business that could make the farm a compelling option.

The Steeles also had goals beyond being successful sheep farmers. They’d been told they had enough money, says Eadie, that they could sell the flock and not have to work so hard. It appeared their children didn’t plan to return to the farm; both were carving out careers in other industries. So, they started looking at more creative farm succession options. They were not even 60 yet and ready for something different.

“Our legacy is the family, not the farm,” Eadie says. “The farm is a piece of land and buildings. It certainly has benefited our children because it’s given us the income to put them through university, to do the things they want to do and set them up in their future lives.”

From cash crops to sheep flocks

Todd Payne grew up on a small cow-calf farm in Norwood, just a few kilometres from the Steele farm. He’d always wanted to farm, but a career as a tool and die maker looked like a good option considering the size and earning power of his family farm. He and Jennifer were determined to focus on their immediate careers while looking for the right opportunity to transition to farming.

They purchased the Payne family farm in 2010 from Todd’s parents and spent five years cash cropping the 60-acre operation while scouting for the right opportunity to expand. That’s when they began to take note of the Steeles, by then customers of Todd’s custom machinist business. “They had a busy operation,” Todd says. “You could see the equipment, the activity — it was busy, and that doesn’t happen unless it’s a profitable operation.”

Payne confesses that he had no burning desire to be a sheep farmer, but he could see the Steeles’ business acumen had helped them build a strong and prosperous farm operation. “My desire at the time was to find an avenue to expand our business, to be predictable and be profitable,” he says.

Impressed with the Steeles’ success, the Paynes decided to try it too. In 2015, Todd retrofitted their old dairy barn, and he and Jennifer bought 50 sheep and a ram from Shepherd’s Choice. They were eager to learn, and the Steeles were happy to help. “They had no particular experience in sheep, but they were doing a very good job. We were honest and willing to share,” John recalls.

After working with and mentoring the Paynes for three years, John told Todd he and Eadie had decided to act on their succession plan. The news immediately ignited a spark for the young farmers. They were now fully committed to the sheep industry: Todd had been accepted into the Master Shepherd’s Course offered by Ontario Sheep Farmers. It seemed time for them to think about expansion — their converted dairy barn was now full to capacity, housing 130 sheep. The Paynes had just entered their 40s, and with three young children were ready to make a move.

Todd and Jennifer expressed interest in the Steeles’ sheep, and the two couples met to see if they could find common ground. A two-hour discussion of what the purchase of the sheep and a facilities lease or rental agreement could look like suggested that the agreement might be too complex. That’s when Todd and Jennifer made their pitch to purchase Shepherd’s Choice.

The fact there was no family relationship with the Steeles made it easier for the Paynes to present an offer. “It was a business decision. We were willing to pay for the assets,” Todd says. He notes making that kind of decision is easier when you don’t have to put a value on sweat equity family members have invested in the farm. “It was a fact-based decision, and there really is no emotional baggage because it’s just not there.”

The deal included the 200-acre home farm with house, buildings, select equipment and more than 750 ewes and rams — they are now managing and operating the Shepherd’s Choice genetics operation under the name Asphodel Sheep Company. The Steeles are building a new home on another small farm they own a few miles down the road.

Looking back, the Steeles note that while they weren’t actively seeking transition, they were ready for it. They firmly believe their transition opportunity and choice is a direct product of the success they have enjoyed. “It’s pretty simple; you have to be profitable to have options,” John says. “Then, others can recognize the opportunity your farm presents.”

Best plans make use of personal skills and experiences

To be successful with farm succession, John stresses that as farmers, you need to “push the limits and surround yourself with innovative people.” They believe their long-time association with Outstanding Young Farmers organization helped them learn from other farm businesses and managers. “We’ve seen other instances of non-family transitions. We knew it was possible, and we just had to sit down and understand how we could make it work,” he says. 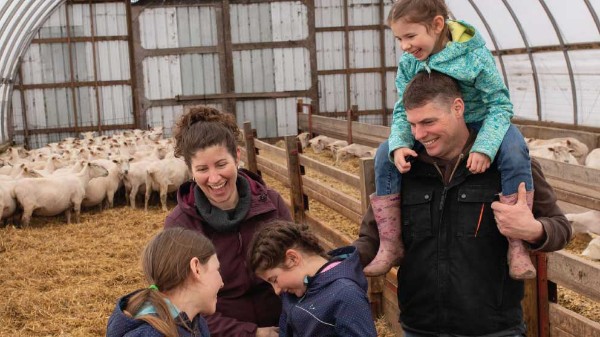 A young family without significant farming assets, the Paynes had to find their own path. “If you are creative and focused on your plan, you don’t need a Class B combine or a million dollars of quota,” Todd says. “There are other ways to get into agriculture without being on a massive scale right from the start.”

The Paynes put themselves in a position to take advantage of the opportunity by working as a team with a common vision. To own a farm, they had to work off the farm. Jennifer’s role was critical. “She’s been a key reason we’ve been able to grow the farm business as aggressively as we have,” Todd says. “As a teacher, her income and benefits have serviced the needs of the family. The farm has never had to do anything but service the needs of the farm, and that’s been a key to our quick growth.”

Todd’s skills and experience have also played a critical role in executing their plan. He’s mechanical. He has worked as a machinist and welder. He assembled a complete fleet of farm equipment — nothing new, he says, but all in good working condition. He’s built a strong customer base for both field and mechanical work that will continue to be a source of revenue and an asset for the farm.

“If your end goal is to get into farming and run an ag business, get out there in the workforce and look for those opportunities to learn, whether it be a hands-on skill or financial knowledge,” Todd stresses. “Those are tools you can put in your toolbox to make your business stronger.”

From the first 50 sheep to the final transition, it all led to a successful non-traditional succession arrangement that has two farm families looking forward to the future.